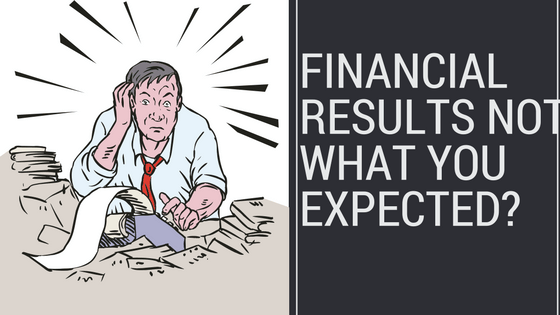 Have you ever been presented with a set of accounts where your results not what you expected?  It’s really frustrating.

Maybe you’ve had a very busy period with strong sales and you are expecting to see a very healthy profit in your accounts.  Instead, you have a poor profit or even worse, a loss.

If you don’t know why you had poor results, how can you prevent it from happening again next year?

You ask your accountant why, but he/she can’t explain why.  They reply with some unintelligible jargon and you think that the problem is you – that you just don’t understand finance.

In the time I have been in practice, almost every year a new client comes along saying “my accounts aren’t what I expected and my accountant can’t tell me why?  Can you help me?”

Over time, I have come to realise that there are six common reasons why accounts can differ from what the owner/manager expects.

Probably, the most common reason is that the owner/manager underestimates costs.  They may have prepared projections when they set up the business or a few years ago when they were looking for a loan.

In the meantime, they have added costs here and there – an extra employee, higher insurance, more travel, new machinery and equipment etc.   But in their head, they still think costs are what they were a few years ago.

They get a surprise when the accounts came out.

Prepare a budget every year.  It actually doesn’t take that long.  And if you do it every year, you should have workings – ideally on a a spreadsheet – from last year that you can just update.

Also, take the time to review and understand the costs that you did incur.  Are they right? Do you remember incurring or approving of those costs?

If you have monthly or quarterly management accounts, this is very easy to do.  And if you have a good accounting software, you should be able to drill down into each expense type to understand them better.

In my experience, most SMEs don’t understand the importance of the stock figure.   As a result, they don’t prioritise the annual stock take.

I worked with one retailer who carried out a rough stock take every year.  He walked through the shop and the store with an assistant recording the stock items and the stock value.

I persuaded him to install a Point of Sale system which had a stock module.  When they entered the stock items into the system they realised that their estimated stock value was way off.

Do a reasonably accurate stock take every year.

Know what’s in stock and know what that is worth.  In that way, you will have a better understanding of the real profits.

Most business owners do not understand the importance of timing.

If a supplier invoices you just before month end and you do not receive the stock items until after the month end, you will have a timing issue if you don’t record the transactions properly.

If you record a supplier’s January invoice in your January accounts but you don’t have the stock until February so can’t include the incoming stock in January then your accounts will reflect that  you bought something that you didn’t get.  You have a purchase invoice in January but nothing to show for it.  Your accounts are wrong.

Alternatively, if you receive goods but the supplier doesn’t invoice for a few weeks, then your accounts will reflect a “windfall”.  You have stock that apparently cost nothing.  Again, your accounts are wrong.

Finally, if you are working on a long project – a multi-month project you can have mismatches due to timing.

You incur costs for the project in month 1 but you don’t finish the project until month 3.  You don’t invoice until the project is complete.  Now you have costs in month1 but no revenue.   When you do invoice in month 3 you have revenue but no costs as they were taken in month 1.

Your accounts are like a roller coaster – up some months and down some months.  You can’t understand it and wonder how you priced those projects so differently.

If you receive an invoice before the goods, then show those goods as goods in transit.

They are not in stock, you can’t physically count them but they are yours – you have been invoiced for them – so the best thing to do is to have a stock in transit. Put them in there and reverse that when they are received when they can be counted in stock.

If a supplier delivers in one month but invoices in a later month, identify the non-invoiced goods and put a provision in your accounts for them.  Accountants will call this accruing for the uninvoiced receipts.

If you have multi-month jobs, try to put a value of the work done but not yet invoiced and show that as work in progress.

I have a manufacturing client who buys packaging from another country.

Two or three times a year, they are invoiced for packaging in one month but that packaging is not received until the following month.  I have encouraged them to record the incoming goods as stock in transit.

That same client buys in raw material on a seasonal basis.  Sometimes the supplier will ring to say that his warehouses are full, and ask if they can take an order early.

They say they can but that they can’t pay for it yet as they hadn’t planned for it.  The supplier says no problem, he will invoice later as per the original order.

In this situation, I have the client making a provision for the invoiced items so that the accounts are more accurate.

I have another engineering services client who install and maintain expensive machinery for large businesses.  Many of their install projects take several months to complete.

It’s common for them to buy machinery for an install in one month but not to invoice for that job for another 3 or 4 months.  This can happen because the job can take several months or also because the customer may ask them to group several jobs into one invoice.

In this case, I ask my client to review all the jobs that are active at the quarter or year end and estimate the value of the work that is done but not invoiced.  They show that as work in progress so that the accounts are more reliable.

Sometimes a client has a lot of waste or scrap in their process but because they don’t measure it, the underestimate the cost of it.

In regulated industries, you may have to take a lot of samples.  The costs of these can quickly build up.

You may also be issuing samples to prospects.  Again, the cost of samples can quickly mount up.  I am not saying not to issue samples but simply to improve your awareness of the cost.

Record and value the waste on an ongoing basis.  You should be doing this anyway as part of your process control and to help you identify improvement opportunities.

However, some more traditional businesses ignore it – treating waste as something they can do nothing about.

That may well be the case, but you need to know the real cost of it.  Also, there is always something you can do to improve it.   Maybe you can change suppliers.  Maybe you can tweak your process.  You should never stop looking for improvements.

Also record the number and cost of testing and customer samples.  It is best practice to show these as a separate line item in your accounts so that the readers of the accounts have a better understanding of your costs.

Some businesses, particularly owner run businesses, have a practice of giving discounts to customers.  Customers come to expect it and its part of the buying process.

If the discounts given are not tracked and measured it can easily happen that they creep up and significantly reduce your gross margin.

How to avoid this.

You need to be able to accurately measure the costs of the discounts that you are giving.

If you have a point of sale system, make sure that it shows any discounts separately.  If you are invoicing have a separate line for customer discounts so that your accounting system will accumulate these discounts and report on them separately.

I had one retail client where the owner told his clients that if his customers came into the shop then they had already made a decision to buy and staff had to do whatever was needed to compete the salem.

Understandably, staff took this as an instruction to discount as much as was necessary to close the sale. The owner thought he was empowering them to discount up to 5%.   The reality was different.

When we installed a point of sale system, it became very clear within the first week that the staff were discounting up to 12% and the real cost of the discounts were much greater then the owner had assumed.

For non-company clients, drawings can be an issue.  For sole traders or partnerships, drawings are effectively the “net wages” that the owners are taking from the business.

Its important to realise that these are “net” so the tax due on the profits of the business remains to be paid separately.

The client may have decided to take, say, € 3000 out of the business for his/her “wages”.  However, over time they start to take money out maybe for pension, maybe to pay the annual income tax bill.  Maybe they set up a direct debit for a membership – maybe a gym membership.

Sometimes they transfer a little bit extra to their personal account if that balance is too low, but they forget about this when estimating the drawings.

In this case, the key issue is awareness.  The client needs to understand what exactly is meant by drawings and to be able to get an accurate value on what they are taking from the business each month.

If they are using accounting software, which I highly recommend, I usually ask them to set up drawings categories (or account codes) for pension, income tax and possibly for irregular drawings.

I have one sole trader client who approached me because his bank balance had come under continuous pressure and he couldn’t understand it, as his turnover had increased and he thought his profitability was good.

When I analysed his bank account, I discovered that he was taking regular weekly drawings or “wages” as he called it. But he had also increased his pension contribution, a change he had forgotten about.  He had also begun to transfer money to his wife’s personal account as her separate business was not performing and she needed help.

When I showed him the data, he recognised immediately that it was correct, and he accepted that the real problem was that he had underestimated the total of his drawings.

These are the most common reasons that I have come across when investigating unexpected financial results and I have carried out this exercise for many clients over the years.

That’s not to say that there aren’t other reasons but these six areas are what I check first when I start on that type of project.

If you have problems understanding your financial results  and you want to discuss them please get in touch.

If you have comments, feel free to leave them in the comments section below.

If you  found this article helpful, you may also be interested in these other articles.

How to prepare Financial Projections

How much does it cost to open your doors?

Why a good budget is vital for every  business owner